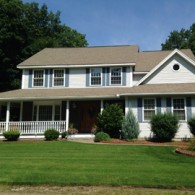 In the big picture of lending, loans given to consumers fall into short-term loans and long-term loans.

Short-term loans are generally considered consumer loans that have terms of 5 years or less. They would include revolving credit cards, installment automobile loans and home equity lines of credit. The rates on these loans are based on what is called the Prime Rate, the rate that banks use to lend money to one another. Whether the rates on these instruments remain fixed or fluctuate over time, they are at some point determined by the Prime Rate.
Long-term loans are generally for more than 5 years and would be most often associated with 10 to 30 year mortgages.   These are primarily fixed rate mortgages that historically followed the yield on the 10-year Treasury bill which tends to change with economic conditions that are affected by inflation.
Check for current mortgage rates here.